How to Transpose Uke Chords
Make Any Song Easier to Play

Being able to change song chords at will is something that every ukulele player worth their salt should know how to do. It takes a little music theory, though, so this guide is here to help you learn what you need to know from the ground up. When you know how to transpose ukulele chords, you can make almost any difficult song you come across easier to play. 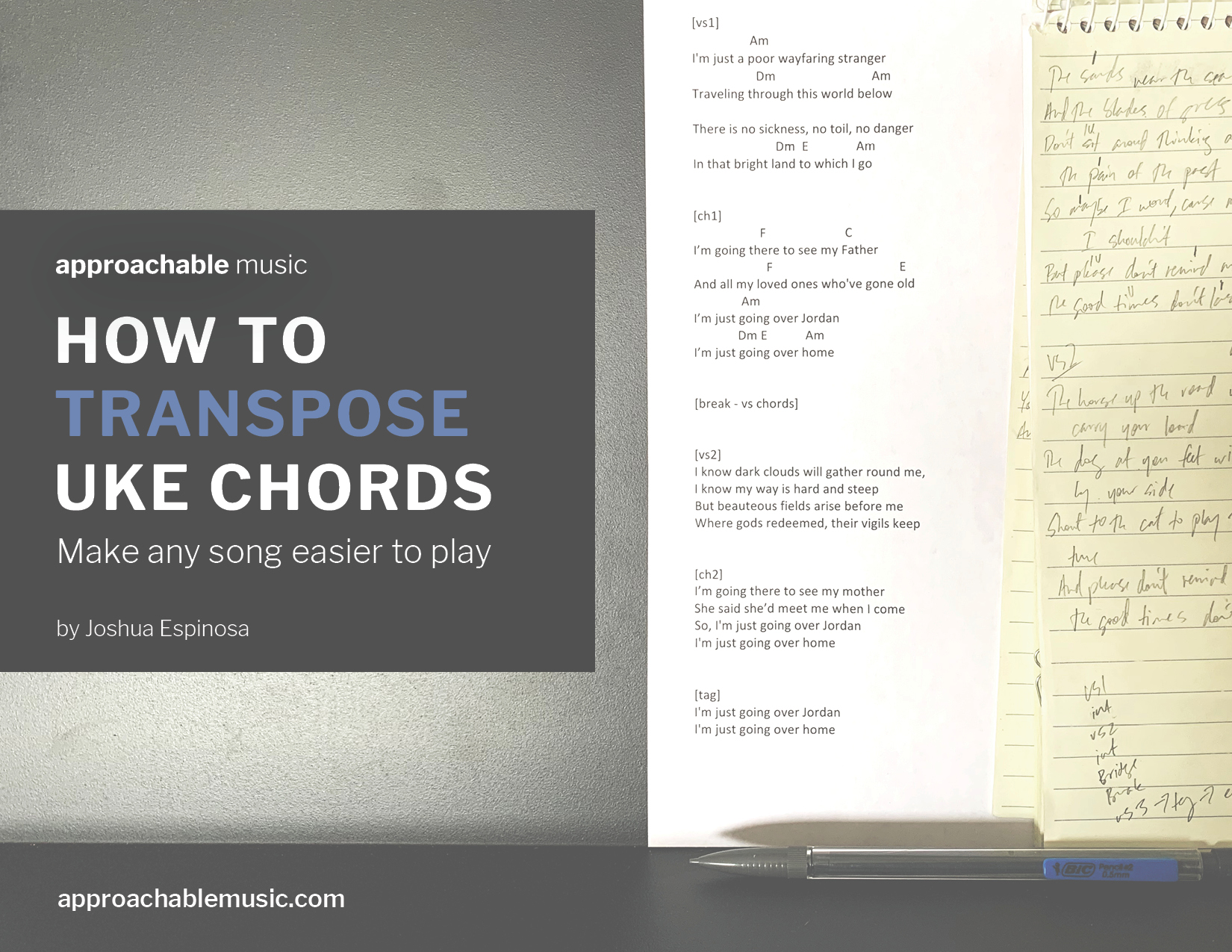 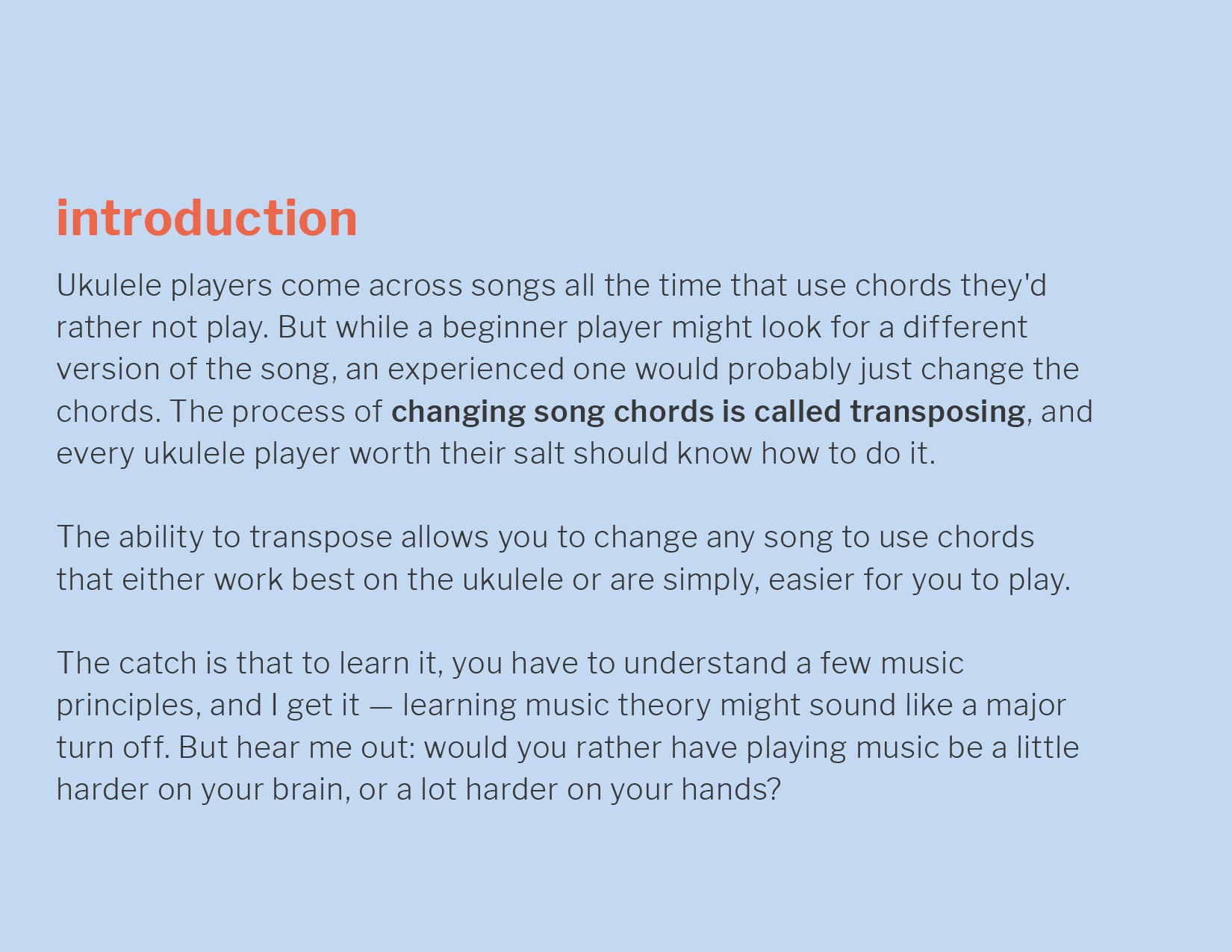 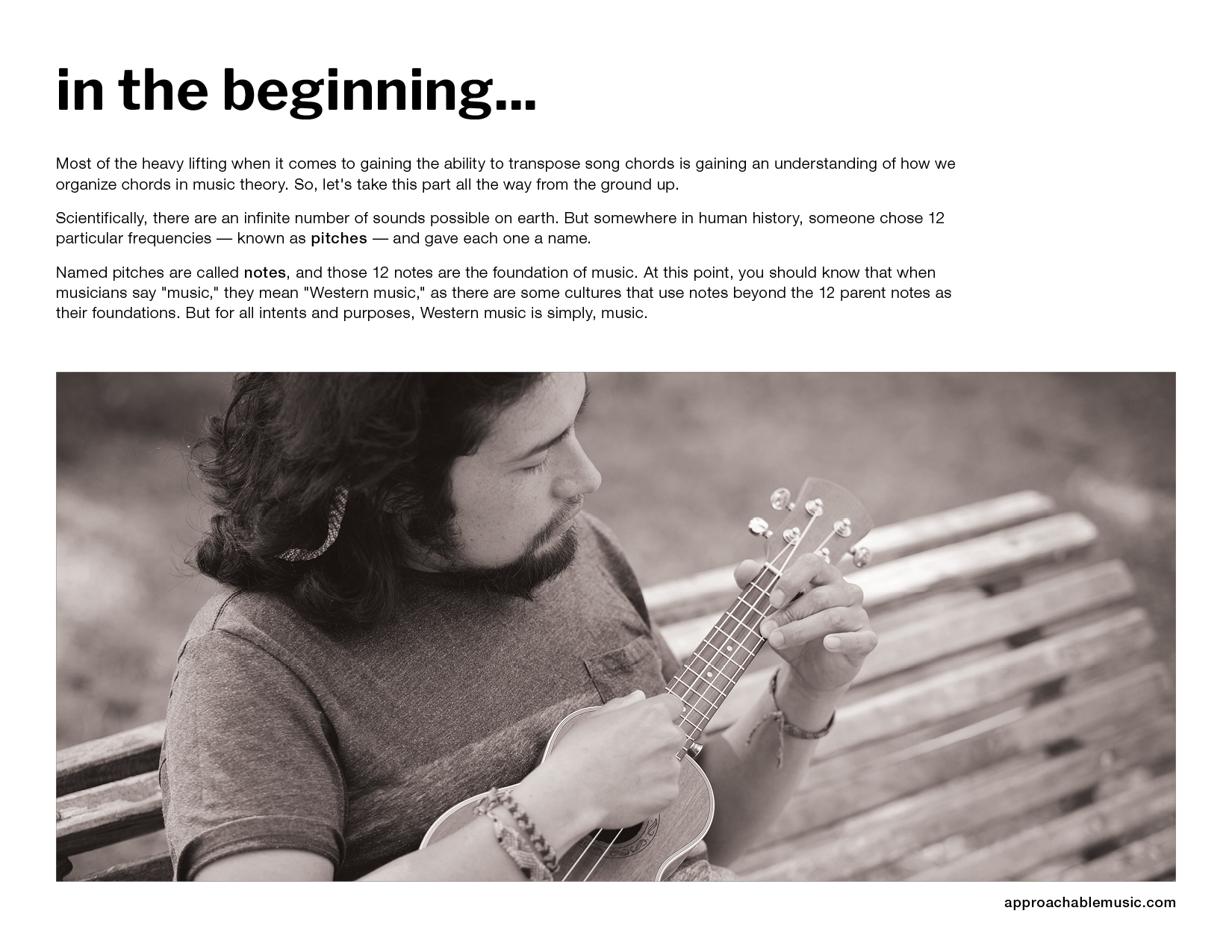 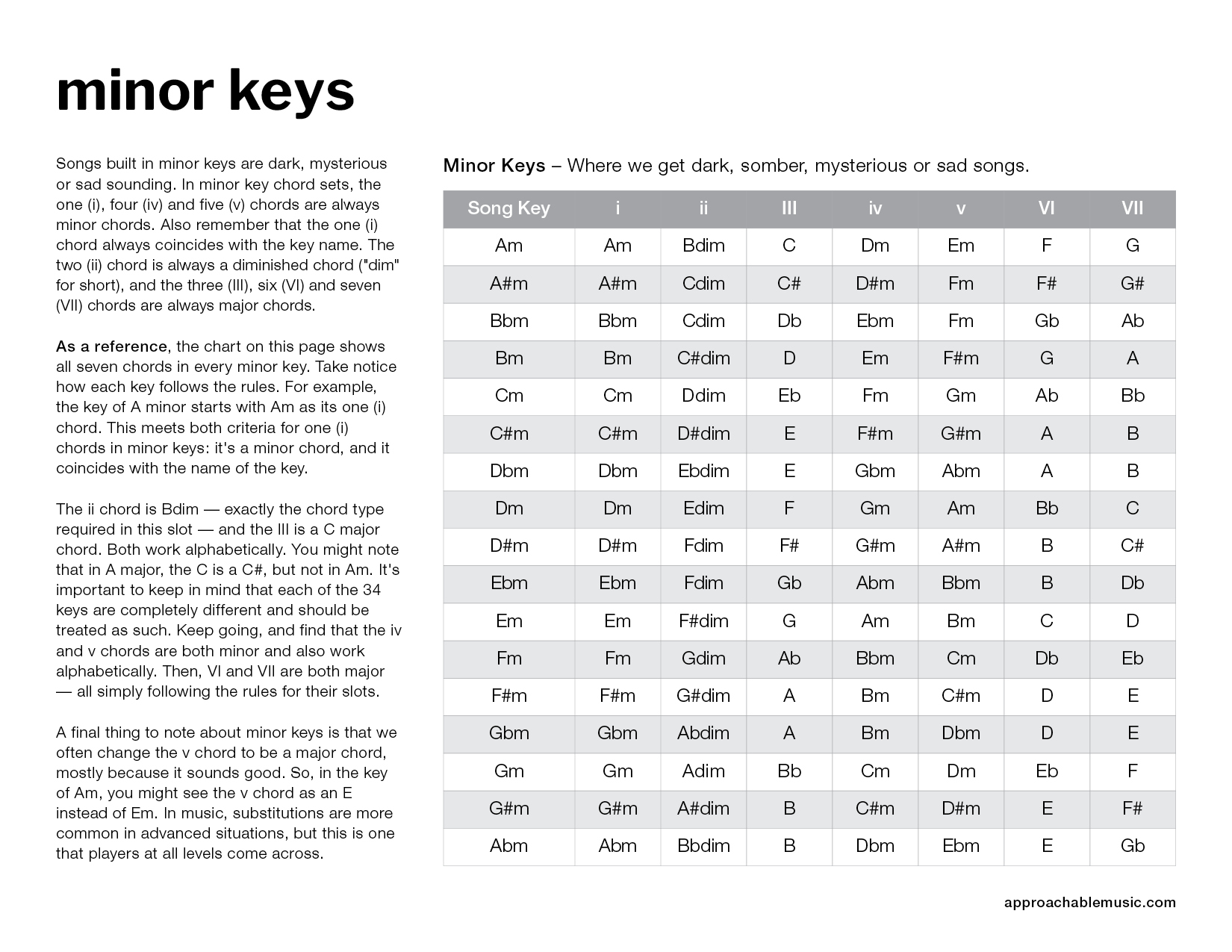 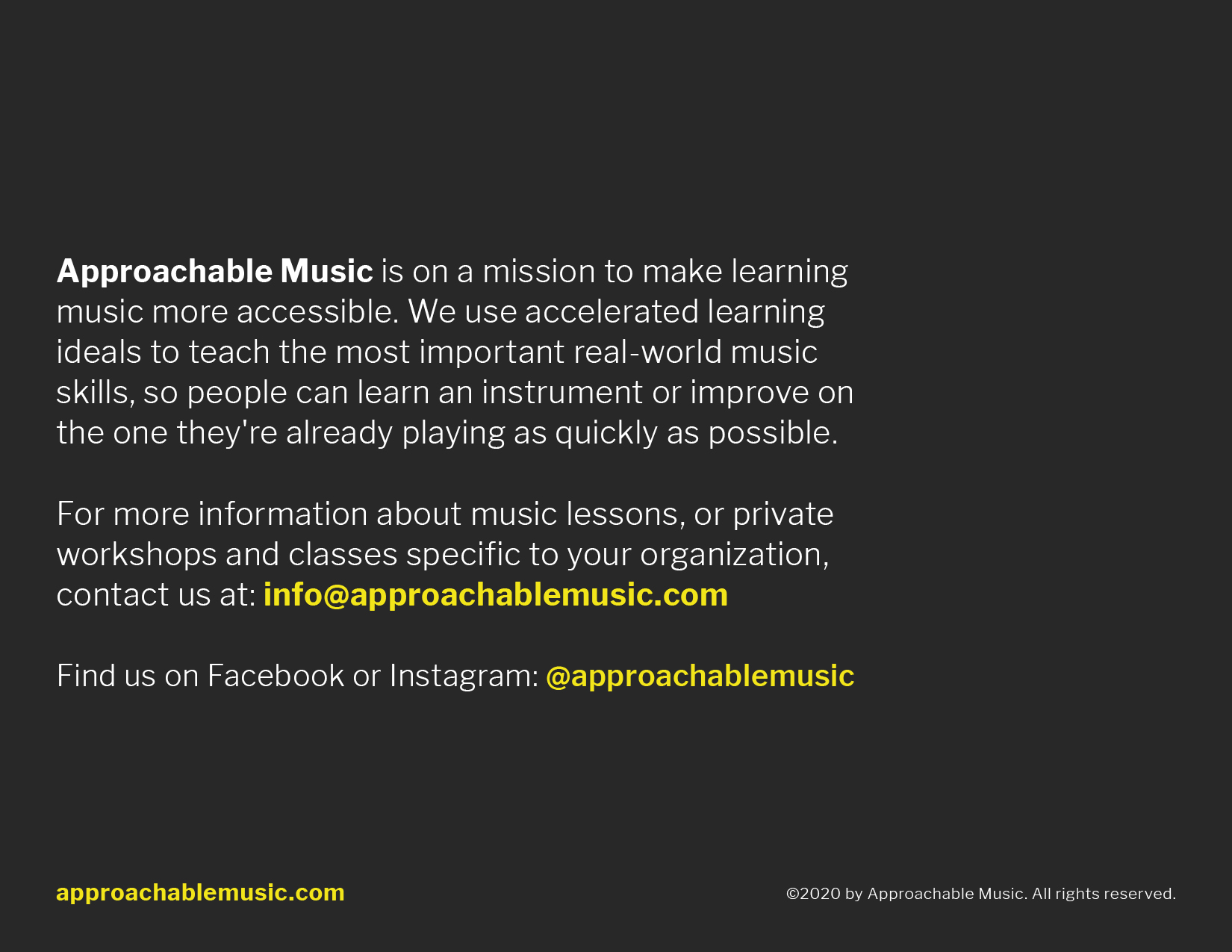 For more information about taking lessons with us in the Lake Nokomis area of South Minneapolis or to chat about other interesting teaching opportunities, send us a message or call 415-350-5674.

MORE INFORMATION ABOUT THE BOOK

In this book, you'll learn how to transpose ukulele chords. Ukulele players come across songs all the time that use chords they'd rather not play. But while a beginner player might look for a different version of the song, an experienced one would probably just change the chords. The process of changing song chords is called transposing, and every ukulele player worth their salt should know how to do it.

The ability to transpose allows you to change any song to use chords that either work best on the ukulele or are simply, easier for you to play.

The catch is that to learn it, you have to understand a few music principles, and I get it — learning music theory might sound like a major turn off. But hear me out: would you rather have playing music be a little harder on your brain, or a lot harder on your hands?

Most of the heavy lifting when it comes to gaining the ability to transpose song chords is gaining an understanding of how we organize chords in music theory. So, let's take this part all the way from the ground up.

Scientifically, there are an infinite number of sounds possible on earth. But somewhere in human history, someone chose 12 particular frequencies — known as pitches — and gave each one a name.

Named pitches are called notes, and those 12 notes are the foundation of music. At this point, you should know that when musicians say "music," they mean "Western music," as there are some cultures that use notes beyond the 12 parent notes as their foundations. But for all intents and purposes, Western music is simply, music.

These are the essential things you need to know about the chromatic scale. The "#/b" is pronounced "sharp/flat," so A#/Bb is said, “A sharp/B flat.” Notes separated by slashes have the same sound (or pitch), but two different names. What you call it depends on context. For example, when you see A#/Bb, it means that A# and Bb sound exactly the same, and as such, are played exactly the same way on an instrument. The note is called one or the other depending on the situation. For now, just think of the note as "A sharp/B flat" in its entirety, and leave it at that.

The chromatic scale is an infinite loop either way. As you go up the scale, when you hit G#/Ab, the next note is A again and the loop starts over. If you're going down the scale and hit A, the next note is G#/Ab. There is no H note.

You can start the loop of the scale from any note. Just remember that when you hit G#/Ab, the loop flips over to A. For instance, you might see the scale written like this: C C#/Db D D#/Eb E F F#/Gb G G#/Ab A A#/Bb B. Take special note of what happened after G#/Ab.

Each note on the chromatic scale has two unique "sounds" associated with it. Each "sound" is called a key and is made up of various musical elements — one of which being a specific set of chords that sound good when played together.

One of the two keys associated with a chromatic scale note is called a major key, and the other is called a minor key. In all, there are 34 total keys, two for each note on the chromatic scale. Since they are considered separate in music theory, notes separated by slashes are counted as one each.

Each one of these 34 keys has a specific chord set attached to it, and understanding how the chord sets are structured as well as how they relate to each other is critical for being able to transpose song chords.

Here are some other things you need to know about the chord sets in each key. Each chord set in each key is comprised of seven chords, numbered one through seven as Roman numerals. Each chord set also includes the same combination of chord types: three chords are major chords, three chords are minor chords and one chord is a diminished chord, which is a type of chord that's much less common than the major or minor ones.

Chord sets have an alphabetical structure. From the first chord, the rest of the chords in the set fall in line alphabetically using the musical alphabet — remember, essentially, after G everything flips back over to A.

In the key of G, G major is the first chord because it coincides with the name of the key. The second chord has to be some kind of A because A comes after G in music. It really doesn't matter at this point whether the chord is major, minor or diminished or even whether it's sharp, flat or neither. All you need to understand at this point is that it's some type of A. The third chord is the same thing — some type of B, then some type of C, all they way to the seventh chord, which is some type of F.

It's really important to get a handle on all of these chord set rules because they're the keys to not only being able to transpose song chords, but also to the formulaic, numerical and alphabetic nature of music theory as a whole. Realistically, if you can get this stuff, other music theory principles won't seem like such a reach.

For example, the key of A starts with A major as its one (I) chord. This meets both criteria for one (I) chords in major keys: it's a major chord, and it coincides with the name of the key. The ii and iii chords, which are always minor, are Bm and C#m. Alphabetically, that works as B and C follow A. At this point, you might wonder how to figure out whether a chord is sharp, flat or neither, but realistically, it's easiest to simply look up the sharps and flats in each key. There's not really a more intuitive solution.

Keep going, and find that the IV and V chords are both major and also work alphabetically. Then, the vi is minor and the vii is diminished — all simply following the rules for their slots.

Songs built in minor keys are dark, mysterious or sad sounding. In minor key chord sets, the one (i), four (iv) and five (v) chords are always minor chords. Also remember that the one (i) chord always coincides with the key name. The two (ii) chord is always a diminished chord ("dim" for short), and the three (III), six (VI) and seven (VII) chords are always major chords.

For example, the key of A minor starts with Am as its one (i) chord. This meets both criteria for one (i) chords in minor keys: it's a minor chord, and it coincides with the name of the key.

The ii chord is Bdim — exactly the chord type required in this slot — and the III is a C major chord. Both work alphabetically. You might note that in A major, the C is a C#, but not in Am. It's important to keep in mind that each of the 34 keys are completely different and should be treated as such. Keep going, and find that the iv and v chords are both minor and also work alphabetically.

Then, VI and VII are both major — all simply following the rules for their slots. A final thing to note about minor keys is that we often change the v chord to be a major chord, mostly because it sounds good. So, in the key of Am, you might see the v chord as an E instead of Em. In music, substitutions are more common in advanced situations, but this is one that players at all levels come across.

How to Transpose Ukulele Chords

Once you have a grasp on how chord sets work, changing song chords from one key to another is pretty straightforward. First, find out the original key of the song you want to transpose by identifying the last chord of the song — not the first — as your key name and hence, your one (I) chord.

Now, it's not always 100% that the ending will give you the key, but it's pretty close. If something doesn't sound right, look at the song chords as a whole and choose whichever key has the most chords in common with it.

Any and all Bm chords, the two (ii) chord in A, would become Dm chords, the ii in the key of C, and so on, until all the chords are changed.

The same rules apply if you were going from one minor key to another — change all the original chords to its corresponding chord in the new key. Note that you can't change a major key into a minor key or vice versa. 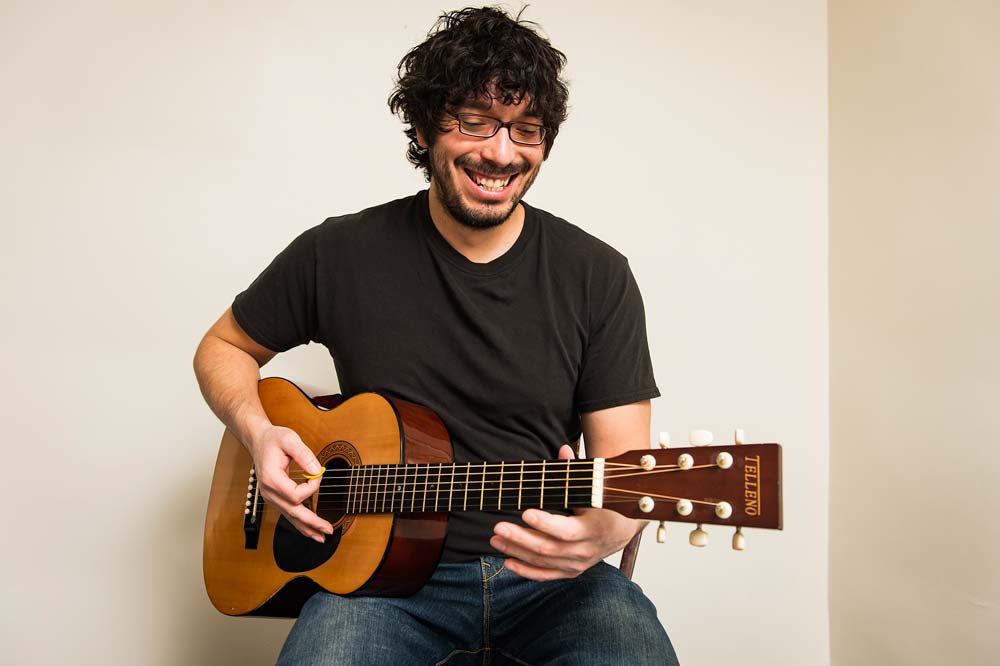 Joshua Espinosa is a Los Angeles native living in South Minneapolis. He started his musical journey over 20 years ago by fumbling through Neil Young and Cat Stevens songs with his dad.

He started giving guitar lessons ages ago, and has also taught music at a private elementary school in Los Angeles, been the music and choir director at a Lutheran church in San Francisco and even did the singer/songwriter thing for a while.

While his passion is definitely playing music, he has a professional background in writing, graphic design and web development. Currently, he is a music director at Minnehaha United Methodist Church in Minneapolis and teaches in the graphic design department at North Hennepin Community College.