Mini Guitar Lessons: How to Count Rhythm in Music

People often associate music with math, but when you take a closer look at how numbers are used in music theory, you'll find out that the two subjects really have little to do with each other.

While numbers on the note side of things are a little more complex, rhythm is much more straightforward; in fact, if you can count to four, you're already most of the way there.

The Basic Rhythm Structure of a Song

A piece of music is broken up into sections called measures (and also bars, used interchangeably) that contain that contain a specified quantity of beats, usually three or four (but it could be anything, in theory), repeated until the end of the song.

Most often, the amount of beats in each measure is consistent throughout the song — if one measure contains four beats, all of them contain four beats. We call the quantity of beats per measure a "count."

Songs move from measure to measure along this count, sometimes switching to a new chord, and sometimes staying on the same chord throughout the entirety of the song. 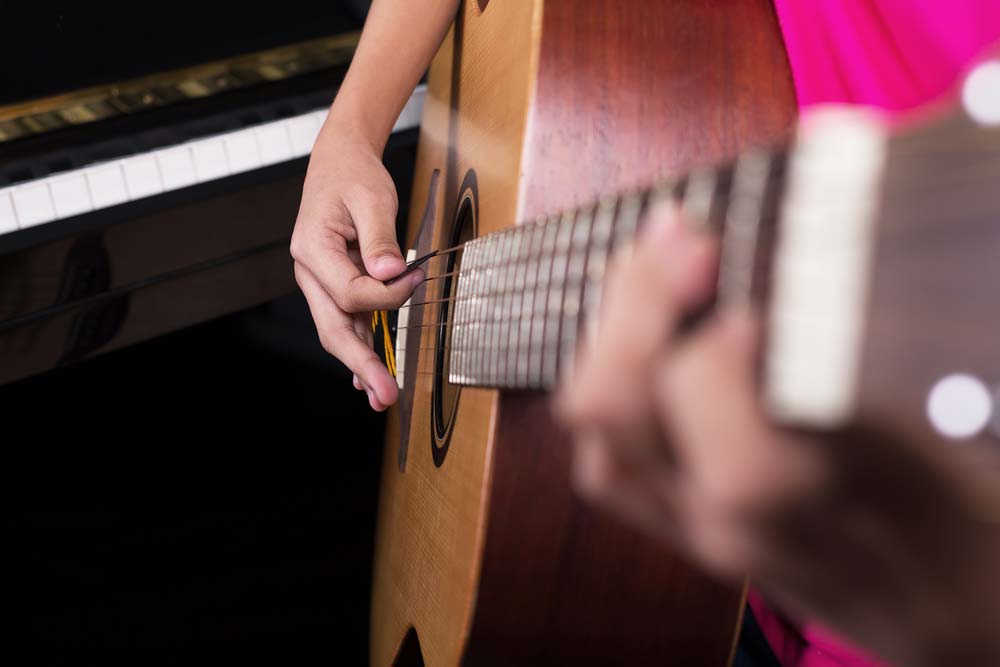 Don't Freak Out About Fractions!

From here, we can divide each beat into two smaller beats '1 and.' This is called an eighth note because half of a quarter is an eighth. You can also note that if we split all of our four beats into eighth notes, we have eight notes: 1 and 2 and 3 and 4 and.

Here's a good place to start bringing in upstrokes during our strum. Take a C chord and strum down on each numbered beat and up on each 'and' beat:

Here's how to strum 16th notes:

Again, 16th notes, 8th notes and quarter notes take up the same amount of space, so you could mix them up and get a count such as: 1 e and a 2 3 4 and 1 etc. Think of the 16th notes the same way as the eighth — silent between each numbered beat.

While in theory, you could keep dividing into infinity, most people just get pretty fast at 16th notes, though if you ever play mandolin or drums, you'll probably have to know 32nd notes, too.

Applying the Strums on Guitar

Most guitar players learn an eighth note strum at the beginning and never really mess around with 16th notes. The problem with that is they miss out on a more polished sound. Logically, since we are putting more notes between beats in a 16th note strum, it’s going to sound more full, which better contrasts the natural pauses in songs.

At first, working with a 16th note strum is difficult because you have to "double" your normal eighth note strum, and singing over it takes a bit of getting used to. Practice 16th notes at higher speeds, and when you’re first learning it, start each song with a few bars (measures) of the 16th note count before you start singing. You’ll find out quickly if your guitar playing is too slow — even if it seems fast — for the singing tempo, so try playing a little faster to find the correct balance.

Music theory can scare a lot of players off of taking guitar lessons because it can get very confusing very quickly. The problem with learning it on your own, though, is that it often leads to more questions than answers.

When you take lessons through The Approachable Music Project, we don't make any assumptions about what you understand about music theory, and can help fill any gaps that may be hindering your progress.

Our studio is located in South Minneapolis and conveniently serve St. Paul students via Ford Parkway and Highway 62. Contact us for more information.