As a guitar teacher who loves playing the blues, I'm glad to report that interest in playing it is alive and well. Despite the fact that many young players will give you a blank stare at the mention of Muddy Waters, Eric Clapton or Jimi Hendrix, everyone still wants to go to the next level on guitar and know how to get a bluesy sound.

The allure of the blues is hard to ignore; there's something about the deep emotion of songs underpinned by spell-binding blues licks that keep guitar players coming back for more.

Yet for all of its seeming complexity, all the great bluesmen basically play the same simple chord progression, often using the same blues chords over and over again. The difference is just that they've mastered what can be done with it.

See, when I first started playing the blues, I kept trying to strum the basic blues shuffle beat that's all over Youtube, and couldn't make it work while I sang. I would get frustrated and wonder why it was so difficult to sing and play at the same time, even though I'd been doing that over any other kind of song for years and years.

Turns out, I was making a common mistake that aspiring blues guitarists often make in the beginning: I left the basic guitar chords behind along with everything else I knew about singing songs, in favor of all the blues guitar tricks that make up the blues sound.

It all started to click for me when I went back to the basics and started playing blues songs like any other song. Naturally, because I listened to a lot of the blues, elements of the style started to present itself in my playing, and I just went with it.

And now, whenever students come in and want blues guitar lessons, their issues always seem to the same ones I had; they usually don't know how to sing a blues song and play it at the same time or worse, their guitar licks don't work over their rhythm.

Some can't even play a straight 12-bar blues progression in full and in time. So, what do we do? We go all the way back to the basics.

Here's how to go from basic chords all the way to singing and playing blues songs at the same time.

The most common type of blues, and the one that all guitar players should know like the back of their hand, is called the 12 bar blues, so named because the whole form lasts 12 counts of four.

In music, a bar, also known as a measure, is just a different way to say how many beats there are in the count before you start over again.

The good thing for guitar players who are new to the genre is that there are no special blues chords that you have to use over the 12 bar progression. The blues chords can actually just be your basic guitar chords, mostly just the 1, 4 and 5 chord in whatever key you're supposed to play in. For reference, here are the 1 4 5 chords in the most common keys for blues guitar: A (1=A, 4=D, 5=E), C (C F G), E (E A B) and G (G C D). 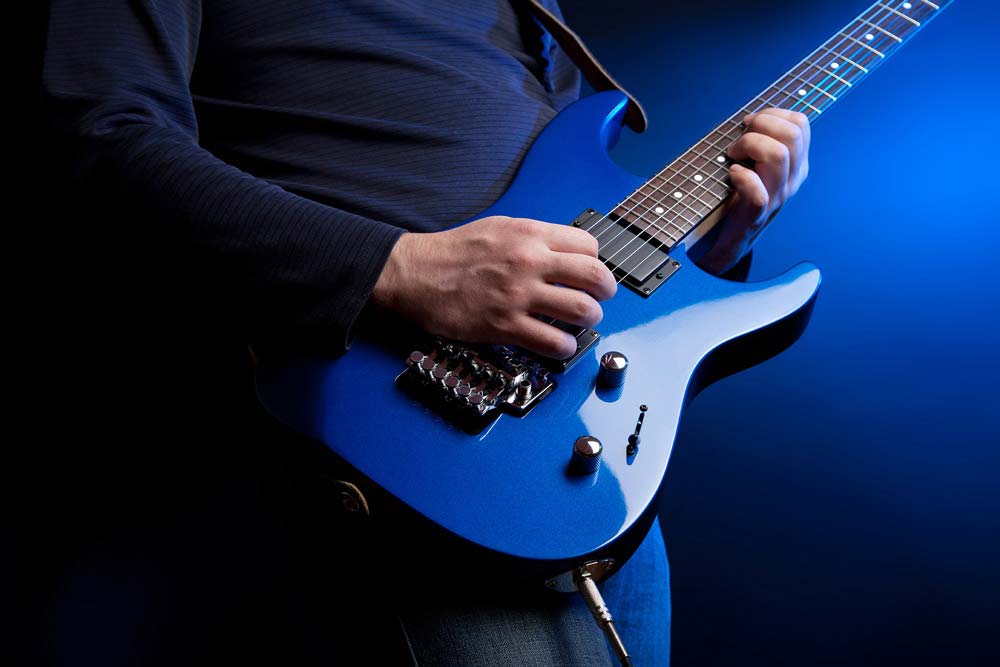 To play the 12 bar blues chord progression, just use your basic open chords and strum normally to start. Here's the progression in the key of A:

Note that in this 12 bar blues example, the chord name is just replacing the number one; you can say "one" if you want to and play the chord at the same time.

I actually like to use even more of a shorthand for a measure, which is pretty common: A///

In this case, the A represents the '1 and' and the three slashes represent '2 and 3 and 4 and.' If you were playing a waltz, with a count of three, the same measure would look like A// — A for '1 and' and two slashes that equal '2 and 3 and.' Essentially, one slash equals the number plus an 'and.'

So, our new 12 bar blues progression in the key of A looks a lot easier on the eyes:

Improving Upon the Progression

You've probably already noticed a few things about this progression that make it seem rather bland. First, the four measures of A at the beginning seems really long and makes it difficult to remember which bar you're on. Not to mention, you finish with two measures of A, so it's really six in a row.

The first piece of advice though, is to make sure you know that structure like the back of your hand before you seek out ways to make it more interesting. Mostly because you never know when you'll be playing with someone who wants you to play it straight, which happens more often than you think.

That being said, let's build upon the progression to make it better, something blues players tinker with all the time.

Starting with the first four measures of A, we have to keep in mind that we are singing lyrics over this, so we still want it to be easy to play, but we also want to do something to break them up so we don't get lost, especially during an instrumental break. Here's the easiest way to do it:

Changing the second and fourth measures from A to an A7 not only gives you a completely different sound, it also makes you change to a new chord, so it feels like two measures repeated (which is more familiar to a guitar player), instead of four measures of the same chord.

For posterity, I changed the eighth measure to an A7 as well, so it acts like a repeat of what we did before we went to the D chord. Repetition and continuity are very important in the blues, and after reading that, you're probably wondering why we didn't do it in the 12th, or final measure as well.

The 12th measure is actually going to be our turnaround, which will help drive us toward a repeat of the progression. Blues songs are usually made up of three to five instances of the entire 12-bar progression, and the turnaround helps give a nice ending to each instance while leading to the next one.

In this case, A7 won't cut it, so we're going to use a chord substitution instead — an E chord. In the key of A, the E chord is called the 5 chord. Without getting too much into the music theory behind it, to the human ear, a 5 chords naturally wants to resolve back to the 1 chord. In this case, the E as a 5 chords helps lead us back to the beginning of the progression and the A, which is the 1 chord in the key of A.

So, here's the new progression in full:

Transpose this into any key you need for your song and strum as normal. One last thing you need to know: some blues songs are called "quick change" blues songs. This means that the second measure uses a 4 chord instead of a 1 chord.

A quick change blues song looks like this, with our improvements included:

You can usually find out pretty easy through a search whether or not the song you chose is a straight 12-bar or a quick change blues song, and sometimes, it can be either. Do what sounds good to you for now; as you get better, you will make the necessary improvements naturally.

The Blues is Rooted in Singing Songs

The next step in your blues playing is to turn the chord progression into a real song. Somewhere in the '60s, the blues became a framework for guitar players to show off their stuff, and still to this day, you can go into blues clubs across the country and find a no-name guitar player playing like a guitar hero.

Blues, though, is more than just awesome guitar solos — it started out as vocal music, and people sang traditional songs to pass time and wrote new ones to reflect their experiences. Guitar playing, in fact, was secondary for most of the history of the blues.

As time rolled on and guitar playing became more synonymous with the blues, musicians made it more complex, but even the best blues guitar players played it with the song in mind, something that seems to get lost today as blues continues to fall out of the mainstream.

5 Blues Songs that Use the Basic Blues Chord Progression

Blues songs in the 12 bar format are really just templates for personal improvisation. While you might think that you have to play the licks from a particular recording note for note, consider that historically, performers typically shared songs, and each had their own versions that reflected their personal style of play.

At the end of the day, you'll have more fun playing the blues if you forget about what licks a particular artist used in a recording and started improvising with a blank slate.

From there, you can explore your own tastes, skills and influences, and all those things will add up to your own unique style if you let them.

Here are five 12 bar blues songs that are just lyrics over the basic chord progression:

Play any of these while strumming and singing like you would any other pop, rock or folk song you might learn. Now, you're really playing the blues — and the thing is, most people who are interested in the blues don't ever get this far. You may not sound as good as Eric Clapton yet or even have a good voice, but building a strong foundation of being able to sing and play blues songs in a basic way will help give context as to how the cool blues parts actually fit into the song's structure.

Want to Learn More About the Blues?

For generations, the blues has been a wildly popular style among guitar students, and learning the basic 12 bar blues chord progression is the first step toward being able to play advanced blues techniques.

But when it comes down to it, getting good at playing blues songs takes being rock solid at the fundamentals. If you feel like you have any blind spots in your playing, check out our PDF guitar guides or contact us to take a few guitar lessons. If you're not in the Minneapolis or St. Paul area, we do offer options for online lessons.